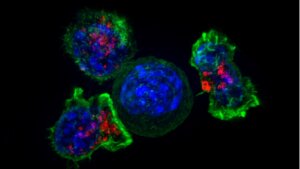 One of the main challenges in curing cancer is that unlike foreign invaders, tumor cells are part of the body and so able to hide in plain sight. Now researchers have found a way to turn white blood cells into precision guided missiles that can sniff out these wolves in sheep’s clothing.

One of the biggest breakthroughs in treating cancer in recent years has been the emergence of CAR-T cell therapies, which recruit the body’s immune system to fight tumors rather than relying on radiotherapy or powerful chemotherapy drugs that can have severe side effects.

The approach relies on T cells, the hunter-killer white blood cells that seek out and destroy pathogens. Therapies involve drawing blood from the patient, separating their T cells, and then genetically engineering them to produce “chimeric antigen receptors” (CARs) that target specific proteins called antigens on the surface of cancer cells. They are then re-administered to the patient to track down and destroy cancer cells.

The only problem is that very few cancers have unique antigens. Unlike the pathogens the T cells are used to hunting, tumor cells are not that dissimilar to the body’s other cells and often share many antigens. That means there’s a risk of T cells targeting the wrong cells and causing serious damage to healthy tissue. As a result the only therapies approved by the FDA so far are focused on blood cancers that affect cells with idiosyncratic antigens.

Now though, researchers at the University of Washington have found a way to help T cells target a far broader range of cancers. They’ve developed a system of proteins that can carry out logic operations just like a computer, which helps them target specific combinations of antigens that are unique to certain cancers.

“T cells are extremely efficient killers, so the fact that we can limit their activity on cells with the wrong combination of antigens yet still rapidly eliminate cells with the correct combination is game-changing,” said Alexander Salter, one of the lead authors of the study published in Science.

Their technique relies on a series of synthetic proteins that can be customized to create a variety of switches. These can be combined to carry out the AND, OR, and NOT operations at the heart of digital computing, which makes it possible to create instructions that focus on unique combinations of antigens such as “target antigen 1 AND antigen 2 but NOT antigen 3.”

When the correct collection of antigens is present, the proteins combine to create a kind of molecular beacon that can guide CAR-T cells to the tumor cell. To demonstrate the effectiveness of the approach, they showed how it helped CAR T cells pick out and destroy specific tumor cells in a mixture of several different cell types.

Most other approaches for helping target T cells are either only able to do basic AND operations to combine two antigens, or rely on engineering the targeting into the T cells themselves, which is far more complicated. There are still significant barriers to overcome, though.

For a start, the bespoke nature of CAR T-cell therapy means it can be extremely expensive—as high as $1.5m—so access to this technology should it make it to the clinic will be limited. So far the researchers have only studied the proteins’ behavior in vitro, so it’s unclear how the body’s immune system would respond to them if they were injected into a human.

There are also other barriers to treating solid tumors using T cells beyond simply targeting the correct cells. T cells struggle to get inside large masses of cancer cells, and even if they do, these tumors often produce proteins that inhibit the effectiveness of the T cells.

This new protein logic system is still a major breakthrough in the fight against cancer, though. And the researchers point out the technique could be used to target all kinds of different biomedical processes, including gene therapies where you need to deliver DNA to a specific kind of cell. The potential applications of this new missile guidance system for cells are only just starting to be explored.